So this is a seriously delayed post…like 6 months delayed.  I figure, you don’t know the difference, and it’s not worth sacrificing the myriad of exciting adventures to manage some artificial time line and force myself to sit behind a computer. So there you have it. 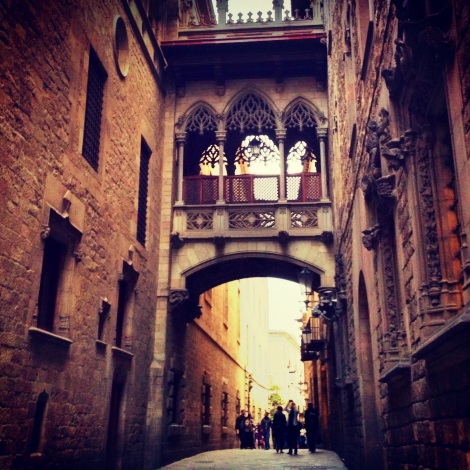 For those who know us, Eric’s birthday is in late October and the biggest party of the year. Since we wouldn’t be home this year to have our annual monster Halloween bash, and it was a certain-bigdeal-birthday-number-that-shall-not-be-named, I had to pull something out of my hat. We were wrapping up the EU road trip and settled on Barcelona. He’d never been, it’s amazing, they know how to party, why not!

One of Eric’s oldest friends, buddies since they were just little guppies, Luke – was traveling through Spain with his wife Amy & daughter Hazel. What Eric didn’t know was that Amy & I had schemed while we were in Tuscany to have them show up in Barcelona for the big-birthday to surprise him. He may have been a bit suspicious when we checked into a posh 2 bdrm apartment,  but he didn’t let on when they rang the doorbell at midnight.  E shot me a ‘what are you up to’ glance but was legitimately confused by their abrasive Spanish as they barked questions in rapid fire over the intercom.  Cautiously, he descended the 3 flights of stairs as I peered down the staircase muffling my giggles, giddy with anticipation…and SURPRISE!!!! Mission accomplished.

Me, Eric, Hazel, Luke and Amy. Best bday gift ever! 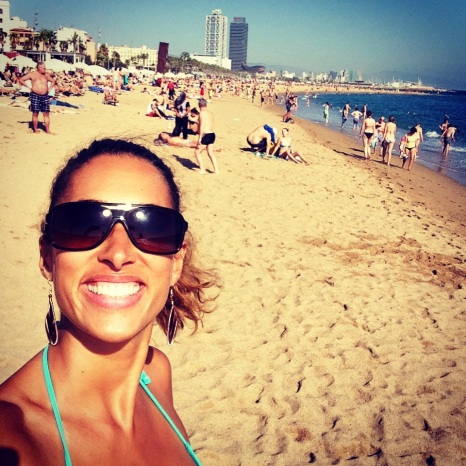 I love a city where people spontaneously dance in the streets. YES!

My favorite moment was our first outing when we stumbled upon hundreds of people swing dancing in one of the main square’s in the neighborhood of Gracia. Within minutes we had Sangria, Tapas, and front row seats, sun shining, glasses clinking. So much love in the air.

Every year my mom gifts Eric 10 lbs of Alaskan King Crab for his birthday. I have no idea how he finagled this as I never received any crab for my birthday, but it is the highlight of his year, and – he shares. This year she was distraught to break tradition given we’d be on the other side of the world. She kept asking me to think of something she could get him and I told her to please not worry about it. Fast forward to the night we check into the apartment. Emma, our host, is putting together a list of potential romantic bday restaurants (E didn’t know about Luke & Amy yet) and she mentions that these restaurants are all clients. Clients? Oh yes, I’m a Norwegian King Crab dealer. Oh, REALLY!?!?!? A few text messages later, mom works her magic, and an order is placed. Voila!

Birthday traditions should never be broken. 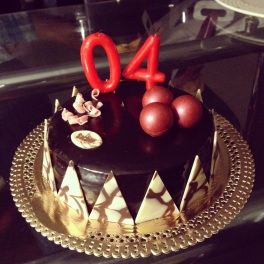 The cake Hazel and I picked out 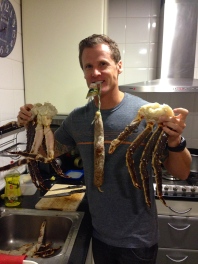 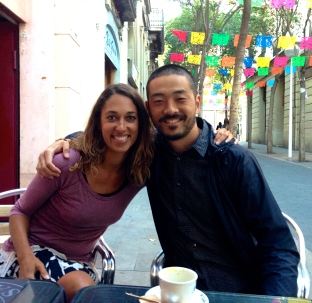 Another great treat – meeting up w/ my friend and ex-coworker, Scott who has been living in Barcelona for the last few years. So fun!

Even the fruit sends it’s love

And lastly, a little tribute to my girl Crazel. Her name is Hazel, but she be crazy! I love this kid. She’s wicked smart, ruthlessly opinionated, beautifully creative, complicated and she makes me laugh. PEGASUS FOREVER!! 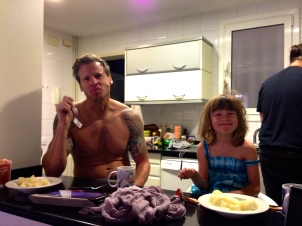 Not ready to get back to work? Read on…

… or explore all of our European adventures!